Welcome to another tutorial my friends. And finally, for the thirteenth (and last) dwarf we will paint the chief of our Company, Thorin Oakenshield himself.

Up until now these are the already painted dwarves:

Luckily, I managed to get two miniatures of Thorin, so I painted both Thorin with the Oakenshield and with the Orcrist (the sword discovered on the Trolls den, just like Gandald's Glamdring and Bilbo's Sting).

Who is Thorin Oakenshield?

"Dwarf king-in-exile. Born in 2746 of the Third Age in the Kingdom under the Mountain, Thorin was the grandson of King Thrór.
In 2770, all the Dwarves of Erebor were driven out by Smaug the Dragon.
In 2790, his grandfather was slain, and his father, King Thráin II, led his people into the War of the Dwarves and the Orcs. At this time he became known as Thorin Oakenshield because, when disarmed during the Battle of Azanulbizar, he used an oak bough as a weapon. After the war, Thorin remained in the Blue Mountains and in 2845, he became Thorin II, king-in-exile.
Nearly a century later, in 2941, he formed the expedition of Thorin and Company and went on the Quest of Lonely Mountain. The adventure finally resulted in the death of Smaug the Dragon and the re-establishment of the Dwarf Kingdom under the Mountain. However, in the fight to hold what they had won, Thorin Oakenshield was mortally wounded in the Battle of Five Armies, and died shortly after."
Source of description: David Day, Tolkien, the Illustrated Encyclopaedia.

How to Paint Thorin Oakenshield?

II: Basecoat hair and beard with a black paint;

IV: Basecoat the boots with a dark brown. 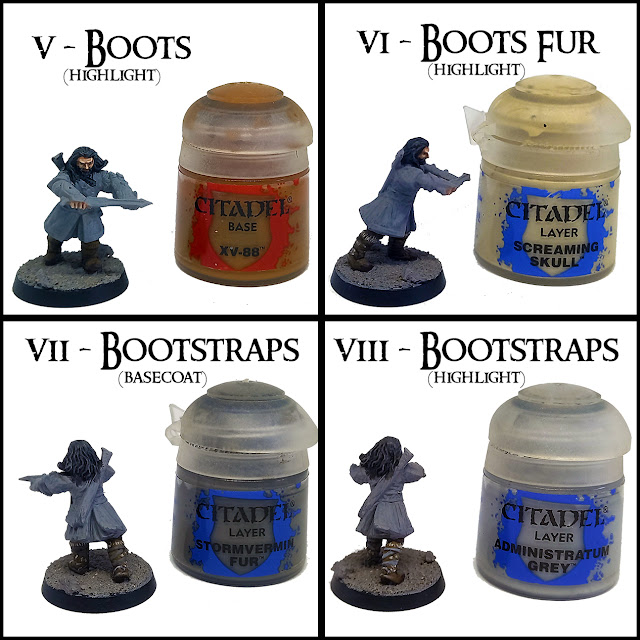 V: Highlight the boots with a leathery medium brown tone;

VI: Highlight the fur of the boots with a bone toned paint (try to pick the most prominent strands individually);

VII: Carefully basecoat the bootstraps with a deep grey paint;

VIII: Highlight the parts painted in the previous step with a light grey tone. 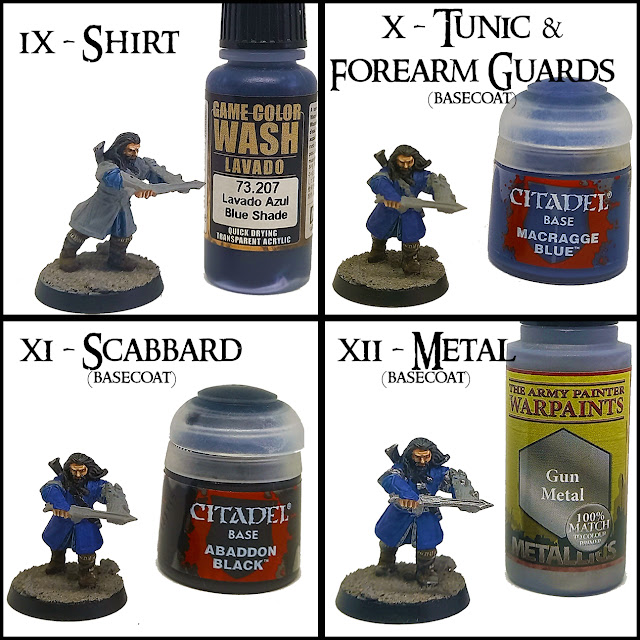 IX: For the under shirt I've used a pretty straightforward approach: white drybush first followed by a blue wash. This aims at providing a different tone of blue from the cloth about to be painted next;

X: Basecoat the tunic and the forearm guards with a strong blue colour;

XI: Basecoat the scabbard and the strap black; 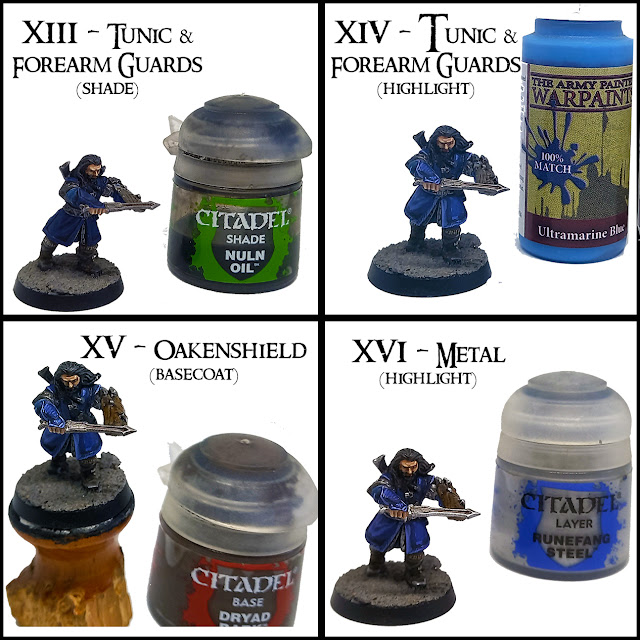 XIII: Shade the tunic, forearm guards and metal parts with a black wash;

XIV: Highlight the tunic and forearm guards with a bright blue paint. You can go on gradually adding hints of white to the blue, and if you feel brave, try to add a few texture stripes to the guards and edges of the tunic;

XV: Basecoat the oaken shield with a bark toned brown; I have forgotten to take the next step photos, but I highlighted the shield with a middle brown (Citadel's XV-88) followed by a glaze of a thinned down brown wash;

XVI: Finally, highlight all the metal areas with a bright silver tone.

As mentioned previously, I also painted Thorin carrying Orcrist instead of the shield. For this one, you only have to follow the metal areas steps. 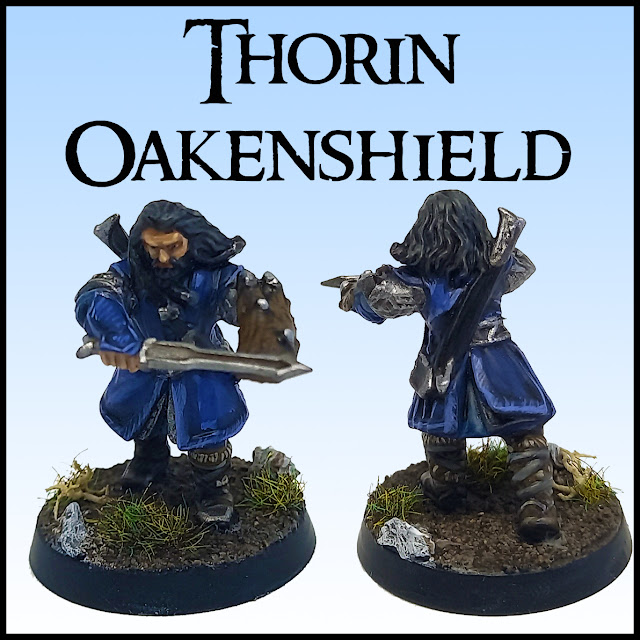 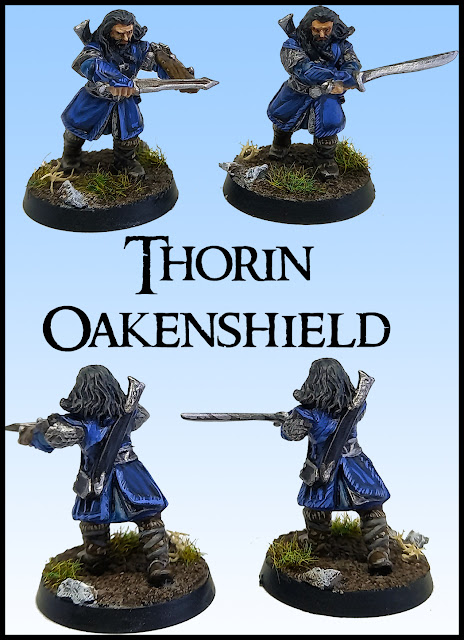 With Thorin Oakenshield's miniature showcase we finish the tutorial for our thirteenth and last dwarf from Thorin's Company!
There's only Bilbo, Gandalf and Radagast's miniatures left to close the Escape from Goblin Town chapter!
I'm hoping this tutorial will be helpful to someone out there.
Until next time! Keep on Painting and Wargaming!
Also, don't forget to have fun doing it!
Namárië!