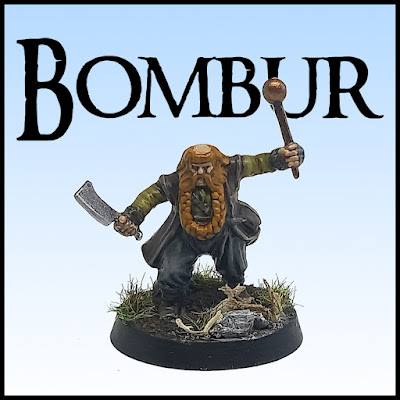 Here we are with another dwarf from Thorin Oakenshield's Company! This time I present Bombur.

All these miniatures from the Escape from Goblin Town box set are sculpted in plastic, so this one isn't any different.

This guy was a fun painting session and it gave me an opportunity to use some metallic colours that I usually don't get to use (the bronze and copper toned paints).

Without further ado, let's get to what matters here.

"Bombur was one of the Dwarves of Thorin's company who journeyed to Erebor to challenge the dragon Smaug. Bombur's distinguishing characteristic was his size, for he was the fattest of the thirteen Dwarves. After the death of Smaug, Bombur lived at the Lonely Mountain.

Bombur was one of the four Dwarves in the fifth group to arrive at Bag End. When Bilbo jerked open his door the four fell on top of one another, with Thorin on the bottom and fat Bombur on top. Bombur wore a pale green hood and asked for pork-pie and salad for his refreshment. When Thorin later called for music, Bombur played a drum.

Bombur's most notable "adventure" occurred at the Enchanted River. Beorn had warned them about its water and they did try to cross without touching it, but due to the charge of the deer, Bombur fell into the river. The company threw him a rope and he caught it, but upon landing he fell into an enchanted sleep. For six days the company took turns carrying the slumbering Dwarf. When finally awake he had forgotten everything since the quest began and lamented waking up to no food, since he couldn't eat anything while he was asleep for six days, and since the company had eaten the rest of the food the night before and saved none for him. Bombur felt weak and wobbly in the legs and sat down and wept. Bombur began to tell the rest if the dwarves about his beautiful dreams, but Thorin told him to be quiet and declared that everyone was annoyed with Bombur and that they should have abandoned him if he hadn't woken up when he did, and pronounced Bombur's dreams to be idiotic. When they were walking that day, Bombur kept on wailing that his legs wouldn't carry him. The others rebuffed him and refused to assist him. After a day of this, Bombur had had enough and refused to take another step. He flung himself to the ground and told them that that they could go on without him if they had to and that he was going to dream of food, if he couldn't get it any other way. He finished by exclaiming he hoped he never woke up again." 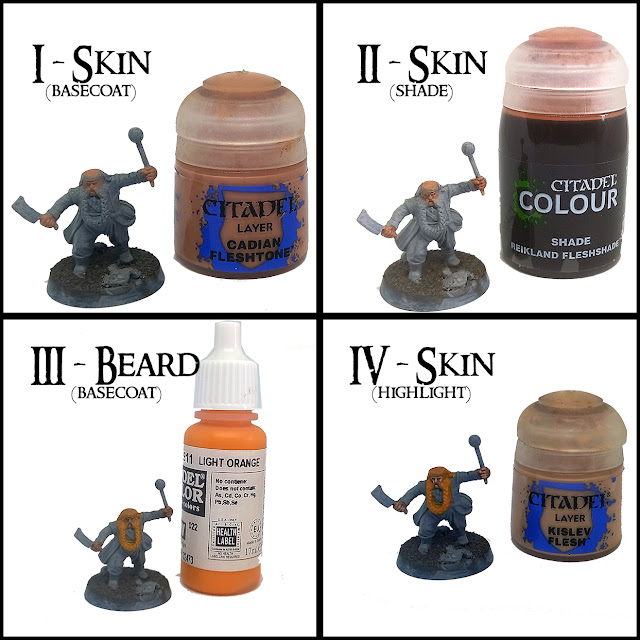 First of all, as usual, I started with the skin, the hair and the beard:

I: Basecoat the skin parts;

III: Basecoat the hair and the beard with a bright orange colour;

IV: Highlight the skin with a lighter skin tone. Focus on the eyebrows, nose, lips, cheeks and fingertips. 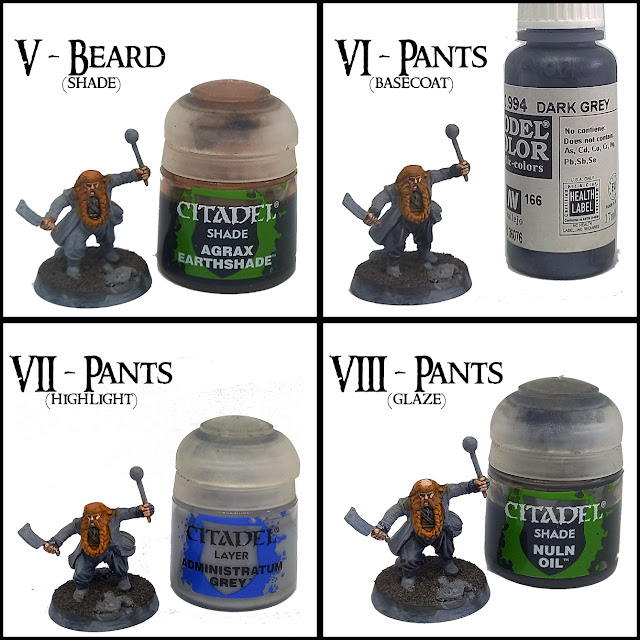 After the skin has been dealt with, I focused on the finishing touches of the hair and beard, and then painted Bombur's pants:

V: Although I only present the shading phase here (with a brown wash), I also gave the hair and beard a final "cleaning" with the very same orange paint that was used on step III;

VI: Basecoat the pants with a dark grey tone;

VII: Highlight the pants with a light grey tone;

VIII: Blend the highlights and the basecoat of the pants with a black glaze. You can use a thinned down wash to achieve the desired effect.

➡ Bombur's gloves were also painted following the steps of the pants! ⬅ 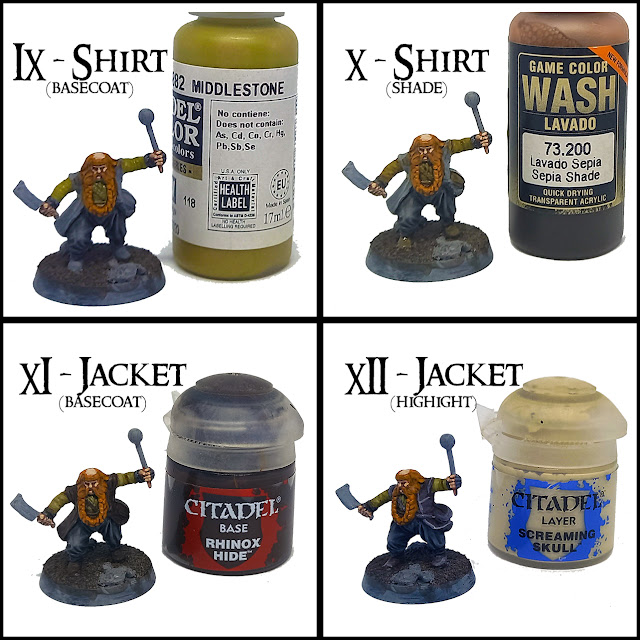 After the pants, comes the time to paint the upper cloth, shirt and jacket:

IX: The shirt was basecoated with a light earthy green (Vallejo's Panzer Series has the perfect paints for this kind of tones);

X: This step aimed at providing shades to the shirt and also to bring down the saturation of the green with a sepia toned washing step. Highlights can then be applied to clean the shading process using the same green of the basecoat;

XI: The jacket was basecoated with a "normal" dark brown;

XII: The highlights of the jacket were done with a bone toned paint. You can also provide some shading with a brown wash over specific areas of the jacket at your taste (mainly the recesses and inner folds).

➡The boots were painted with the same process as the jacket!⬅ 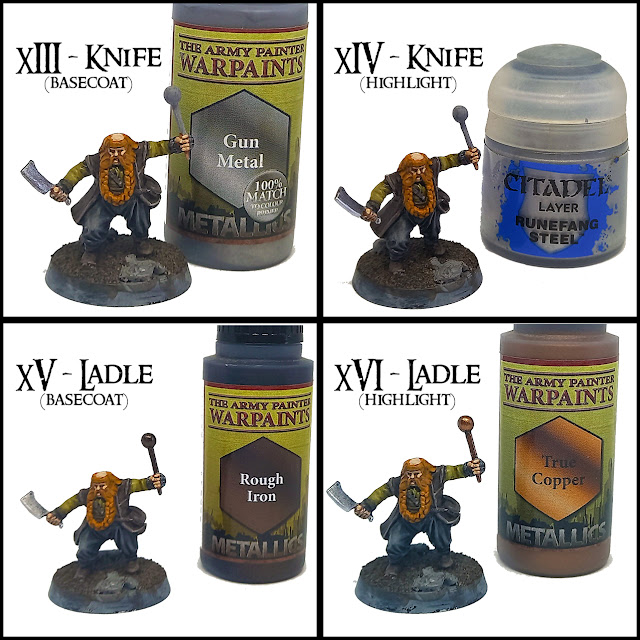 After all the previous steps, there's only need to paint the weapons. One cleaver knife and one brassy soup ladle:

XIII: Basecoat the knife with a dark silver. After this is done, you can also apply a black shade to it;

XIV: Highlight the knife with a light silver. Focus on the edge and the handle;

XV: The soup ladle was basecoated with a very dark brown toned metallic paint to achieve the brass goal that I wanted. Like the knife,  you can also apply a black shade to it;

XVI: The final highlights of the ladle were done with a copper toned paint. Focus on the edges of the handle and the centre of the spoon.

After all this steps are done Bombur's miniature is ready to base and varnish! 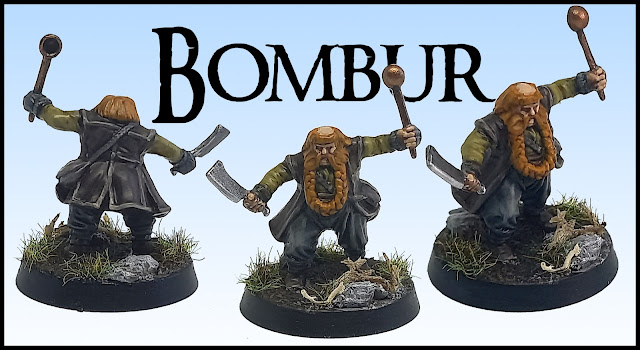 Until next time! Keep on Painting and Wargaming!
Namárië!