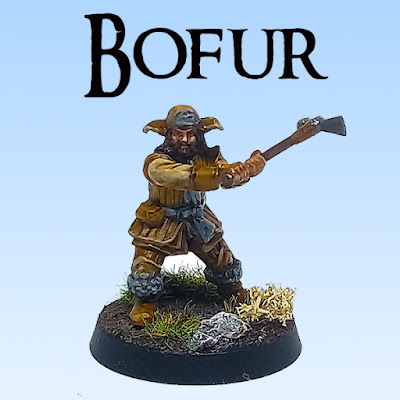 I'm back with another painted dwarf from Thorin Oakenshield's Company!

This time I will present Bofur, a miniature from the Escape from Goblin Town box set.

As usual with the Middle-Earth minis, the colours I used are very "earthy". Mostly browns for this one.

"Bofur's parentage is unknown; the only familial connections mentioned are that Bombur is his brother and Bifur is his cousin. He was not of Durin's line although he was descended from Dwarves of Moria. His birth year is also unknown. However, from Bilbo Baggins' account of the quest to Erebor it is known that the brothers Fíli and Kíli were the youngest of the thirteen "by some fifty years" and that after Thorin had been captured, Balin was "the eldest left". Since Fíli was born in T.A. 2859 and Balin was born in 2763, this would put Bofur's birth between 2809 and 2763, and he would have been between 132 and 178 years old during the quest to Erebor.
At Rivendell in T.A. 3018, Glóin told Frodo Baggins that Bofur was still alive and living in Erebor, along with Bifur and Bombur [3]. It is possible that Bofur fought in the Battle of Dale against Sauron's forces the Easterlings. His death date is unknown though it would have been before Dwalin as he was the last dwarf of the company to pass away in Fo.A. 91."
Source of description: http://tolkiengateway.net/wiki/Bofur 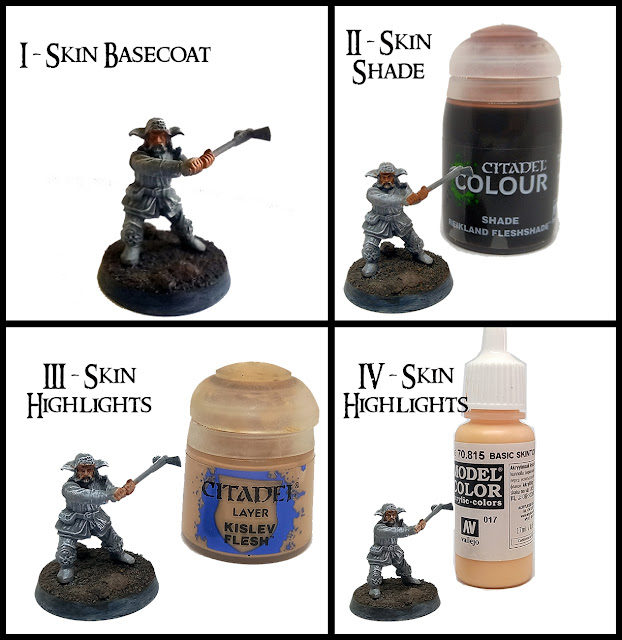 I: Basecoat the skin parts (I used Cadian Fleshtone but forgot to put it in the photo);

III: Highlight the skin with a lighter skin tone;

IV: Highlight further the small details of the skin. Focus on the eyebrows, nose, cheeks and fingertips. 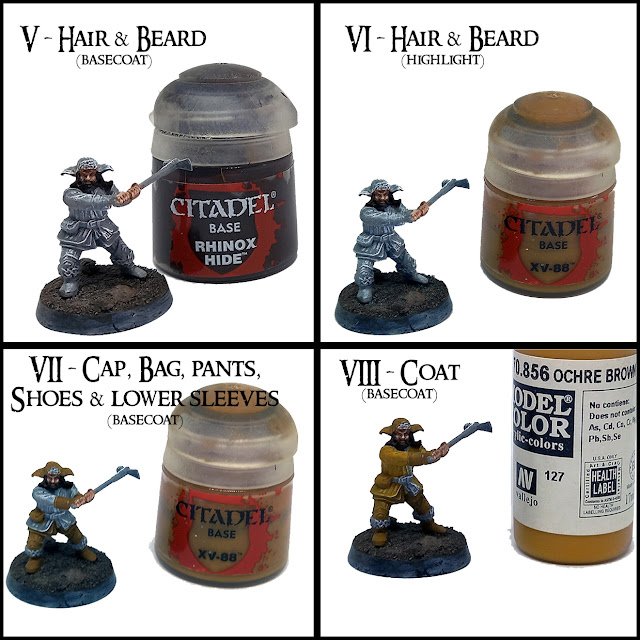 After dealing with the skin, I painted the hair and the beard and, after that, I started painting Bofur's cloth.

V: I gave the beard and hair of the mini a smooth coverage of a dark brown;

VI: The highlights of the hair and the beard were done with a medium tone brown, just so the highlighted parts weren't too distinguished.

VII: The cap, belt bag, shoes, pants and under sleeves were painted with the same brown tone of the highlighted hair and beard.

VIII: Bofur's coat was basecoated with a similar tone of brown as the previous two steps, although with a lighter tint to it. This will make all the difference for the next steps. 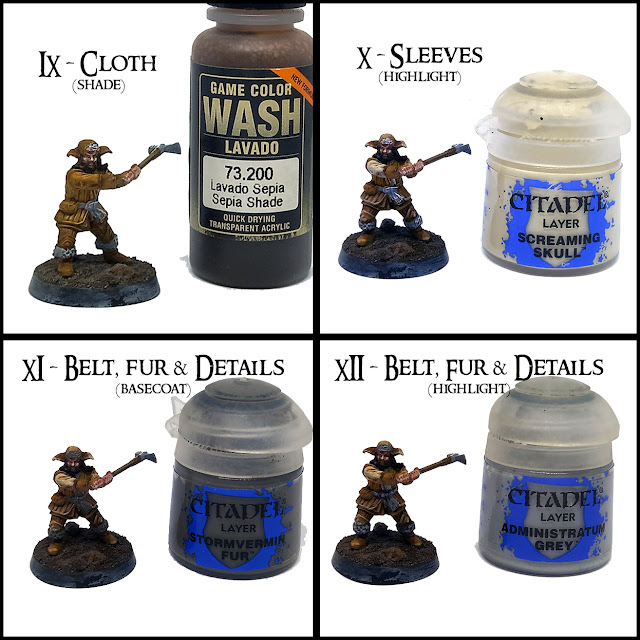 IX: After basecoating all the cloth, I shaded it with a Sepia wash. This not only provides shades to the recesses, but also brings definition to the colours of the basecoated areas.

X: The sleeves were highlighted with a bone tone. I have also used this paint to highlight a few details in the miniature such as the knee pads and the tips of the coat and the cap.

XI: I then used a dark grey with a brown tint (Stormvermin Fur was perfect for it) to basecoat the fur parts (cap and boots), the belt and the scarf.

XII: All of the grey painted areas were afterwards highlighted with a lighter clean grey.

Ghost step (since I forgot to take pictures of it): the metal parts (weapon and belt buckle) were basecoated with a dark silver (Army Painter's Gun Metal), shaded with black (Nuln Oil) and finally highlighted with a bright silver (Runefang Steel).

In the end comes the basing (at personal taste) and the varnishing (suggested but optional).

And that's all for now my friends!
I know I've been having a lot of big pauses, but well, this is my blog and I do as I please :D
After all this is a hobby, and it shouldn't make us feel like an obligation. I will paint and post when I want to. I just hope to be helpful to someone and to have fun with it!
I really hope you find this tutorial useful!
Until next time! Keep on Painting and Wargaming!
Namárië!