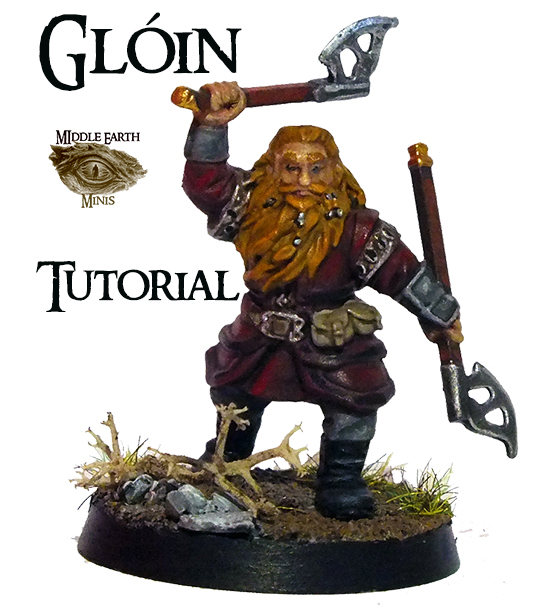 In this post I'll make a tutorial on how to paint Glóin, another dwarf from Thorin Oakenshield's Company (as my previous mini, Óin), a miniature from the Escape from Goblin Town starter box (Games Workshop).

This painting session went a little bit better than Óin's, but I'm still struggling to get the best out of these the Hobbit new kind of sculpts. Perhaps I'm too used to the old GW's sculpts, and that's a bit of a problem, on which I'll have to work on.

"Dwarf of Thorin and Company. Glóin, the son of Gróin, was born in the year 2783 of Third Age.

He fought in the Battle of Azanulbizar and was a companion of both King Thrain II, and his son, Thorin Oakenshield.

With Thorin and Company he went on the Quest of Erebor which resulted in the death of Smaug the Dragon, and the re-establishment of the Dwarf-kingdom under the Mountain. In that kingdom he became a wealthy and important lord.

In the year 3018, he travelled with his son to Rivendell. His son, Gimli, was then chosen as one of the Fellowship of the Ring, and Glóin returned to Erebor.

During the War of the Ring, he fought in the defence of Erebor.
He died in the year 15 of the Fourth Age."

And that's all for now my friends!
The next tutorials will be focused on Fili and Kili!
I really hope you find this tutorial useful!
Until next time! Keep on Painting and Wargaming!