It's time for a Dori tutorial, another dwarf from Thorin Oakenshield's Company!

Like the other dwarves, this is a  miniature from the Escape from Goblin Town box set, sculpted in plastic.  Although it was a fun painting session, I got a little bit frustrated with the lack of detail present in the flail that Dori is brandishing. Looks like lazy sculpting. But anyway, I'm happy with how it turned out, specially with the tones of the purple cloth.

"When Bilbo first met Dori (in the fourth group of Dwarves to arrive at Bag End alongside Nori and Ori and another set of brothers, Óin and Glóin) he was wearing a purple hood along with a silver belt, same as his brother Nori. During the evening when Thorin called for music, Dori (along with Nori and Ori) played the flute.

Thorin stated that Dori was the strongest of the Dwarves in the company. Dori (and Nori) shared Bilbo's opinion that meals should be plentiful and frequent, and also it is said that Dori was "a decent fellow despite his grumbling".

Bilbo proclaimed Dori to be "really a decent fellow" because thrice Dori assisted Bilbo when the hobbit might otherwise have been killed: First, Dori carried Bilbo in the tunnels of the Misty Mountains during the escape from the goblins, but unfortunately dropped him which led to the hobbit's encounter with Gollum. Upon Nori's discovery that Bilbo was gone the other Dwarves blamed Dori for losing their burglar, especially the wizard Gandalf arguing with the dwarf. Second, during the escape from the Wargs, Dori climbed down from a tree, which allowed Bilbo to scramble up Dori and into the tree. Lastly, Bilbo grabbed Dori's legs as they were carried off by an eagle, saving them from a fire lit by Goblins, much to both Bilbo and Dori's dismay crying "My legs! My poor legs!".

Dori lived a wealthy life after the quest to reclaim the Lonely Mountain. He was still alive during the War of the Ring, as mentioned by Glóin before the Council of Elrond in T.A. 3018. He probably fought in the Battle of Dale against Sauron's forces, the Easterlings, along with the other members of the company still alive. His date of death is unknown, though it would have been before Fo.A. 91 when the dwarf Dwalin passed away, as Dwalin was the last member of the Company to pass away."

How to Paint Dori? 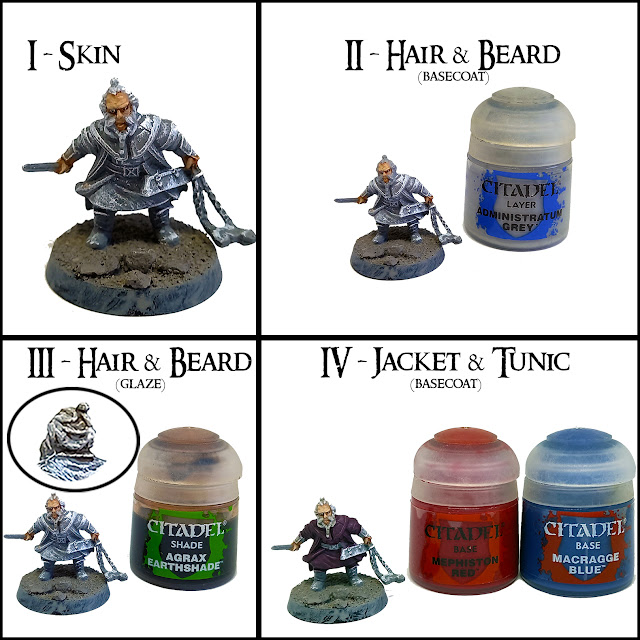 II: Basecoat the hair and the beard with a light grey, and a white afterwards;

III: Glaze and Shade the hair and the beard with a diluted brown wash;

IV: Basecoat the jacket and the tunic with a mix of red and blue. If you happen to have a purple paint that matches your taste, use it. The trick with this mixing is to play with the characteristics of both colours: more blue equals to less saturation, while more red results in more saturation (the colour gains more vibrance/brightness). 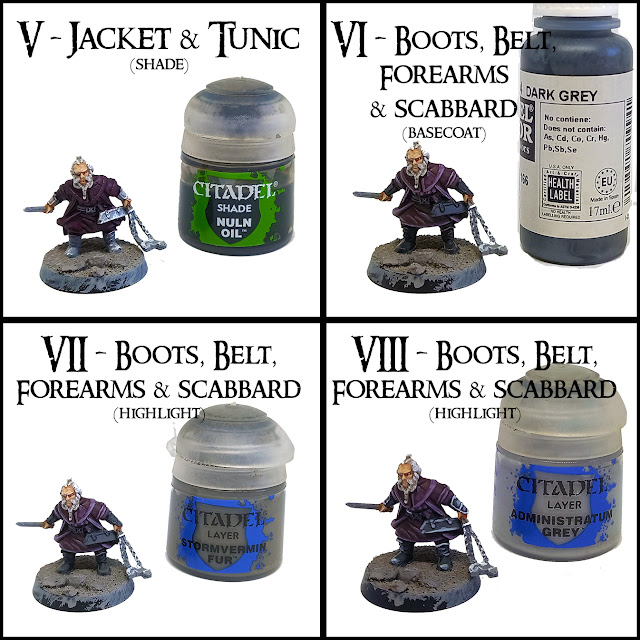 V: Shade the tunic and the jacket with a black wash. After it dries, highlight the prominent areas with the same mix of purple, adding also a hint of a light grey. You can add more grey gradually, as you move forward in your highlight steps;

VI: Basecoat the belt, the boots, the forearm pads and the sword scabbard with a dark grey;

VII: Highlight the previously painted areas with a lighter grey (note it isn't a light grey, but a grey lighter than the one used on step VI);

VIII: Finish the highlights with a light grey applied in the most prominent areas of the highlight, like the edges. 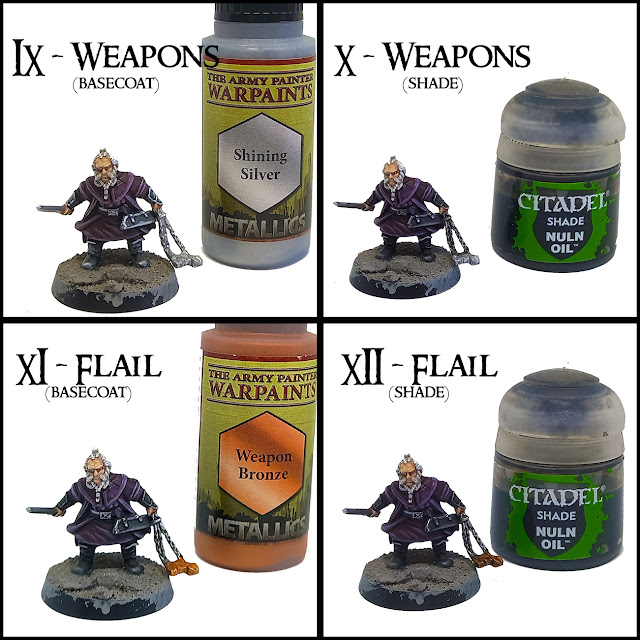 IX: Basecoat the weapons (flail and sword) and the belt buckle with a bright silver, even though the flail will be painted later with another tone. The silver undercoat will help with the next steps, providing a clear layer for the paint to adhere to;

X: Use a black wash to shade the weapons and also thin it down to glaze the grey parts previously painted;

XI: Basecoat the metal points of the flail with a bronze toned metallic paint;

XII: Shade the recesses of the flail with a black wash. Try to give it the most depth you can; 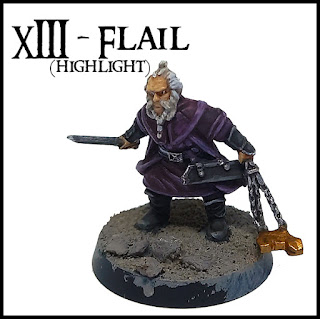 XIII - Highlight the flail's most prominent areas with the same bronze paint used before. The sculpt of this miniature isn't really the best in that area, but try your best to give it some details;

After all these steps are done, Dori is ready to be based and varnished! 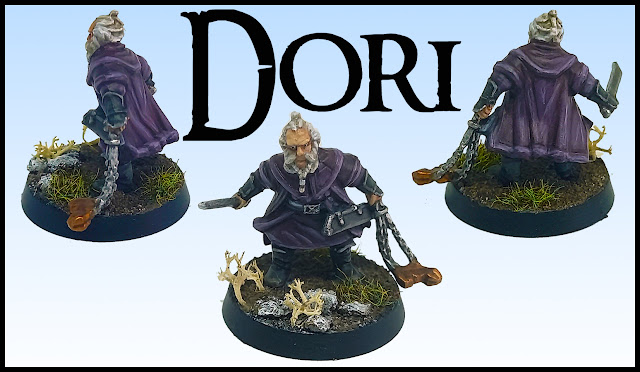 With Dori's miniature showcase we finish another tutorial!
I'm hoping it will be helpful to someone out there.

Until next time! Keep on Painting and Wargaming!
Also, don't forget to have fun doing it!
Namárië!