Welcome to another blog post!
This time I will be writing about bases - more concretely, my Isengard bases.

Basing the miniatures is a fundamental part of this hobby (just as important as painting them, I should say), and we all need to decide how we want our army bases to look before we start to properly work on them - evidently, bases from the same army should all look alike, theoretically.

When deciding how my army bases should go, I'm usually faced with one master question:

I tend to choose the native land of the army when deciding its look, but it isn't carved in stone. For example, when I paint Mordor Orcs, I always base them with a lot of dark stone and sand (and minimal or non-existent flora) to get that volcanic look.

On the other hand, for my Isengard army, there were two options upon the table:

I decided to go for the second option. In my mind, the Uruk-hai miniatures have a lot of dynamic poses that should be placed on proper battlefield, instead of their master's headquarters.

So, Rohan battlefield it is! But how?

Tolkien described Rohan as being "like seas of grass", and that's a good starting point to get inspiration for my bases. There are some problems though: miniature bases look terrible when full of static grass (to my eyes, at least) and they need some diverse elements to look good. My answer to these "issues" was simply to go for a fertile type of land, which means brown earth, some clear stones, bright-green grass and some green elements of taller flora.

For these Rohan bases and aside Tolkien's description, I took inspiration on the 2001/2003 films shot in New Zealand and also on a region from my own land (Portugal), called Alentejo.

There is just one last subtle decision I made for my Isengard army bases: the Uruk-hai scouts and their leaders (like Mauhúr and the commanders) shall have a little more taller flora than the rest of the army, since their main action takes place in Emyn Muil (Amon Hen), a forest type of terrain.

First of all, let's get to the materials: 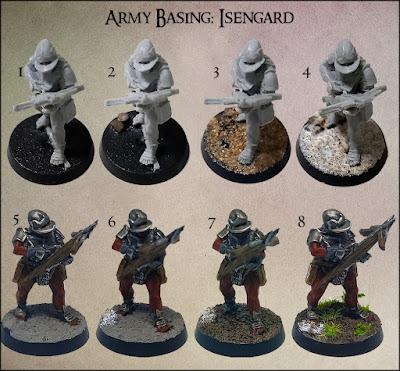 There are 8 steps for my take on the Isengard army bases: 4 pre-painting the miniature and other 4 post-painting it.

Showcase on Other Miniatures 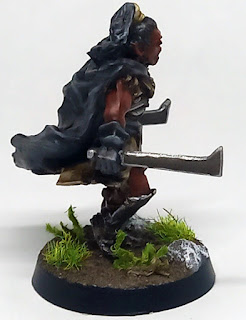 And that is all for this post and tutorial!

I will certainly keep painting and upgrading my Isengard army in the near future (you already had a glimpse of that Mauhúr miniature in the showcase, which will be the focus of the next post).

Until next time! Keep on Painting and Wargaming!
Also, don't forget to have fun doing so!